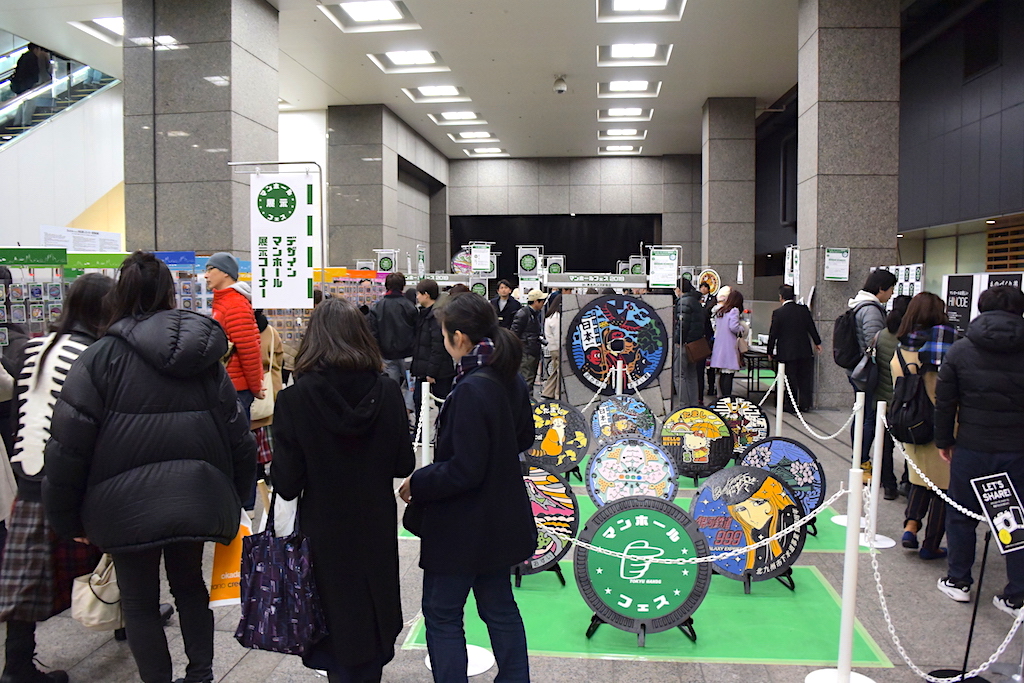 'Tokyu Hands' store is what many of my friends visiting Tokyo call 'shopping heaven'. Originally a DIY crafts and materials shop, it has expanded to stock the most exotic hair colour, bikes, chair socks, miniature sushi key rings, styrofoam heads, fancy home appliances, travel sized everything, and everything else. In other words, a spectacular line-up of everything you didn't know you needed.

Their impressive online store boasts shipping to over 120 countries worldwide!

But today I'm sharing one exhibition that Tokyu Hands Shinjuku, that has one of the largest floor spaces spanning eight stories, hosted; 'Manhole Festival'. 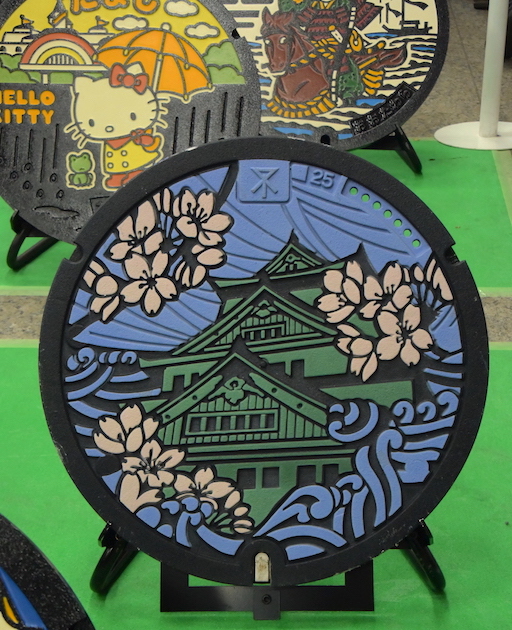 I do appreciate functional beauty, or the extra step and care taken to make something pleasing to the eye when it would be quite acceptable simply blending into its environment. Manhole covers are just this. They're part of the road and could easily go unnoticed. Yet, these designs pop with colour and make grey asphalt streets interesting, inviting you to stop and admire... presuming it's safe to do so as we don't hear of manhole covers bursting out into flames in Tokyo... unlike in some places. This one is from Osaka-shi, Osaka. Depicting Osaka castle tower that was reconstructed for the third time in 1991. In the forefront are cherry blossoms that the castle grounds are famous for and is also the symbol of the town. The swirly patterns on the bottom seem like waves, as Osaka has a bay. 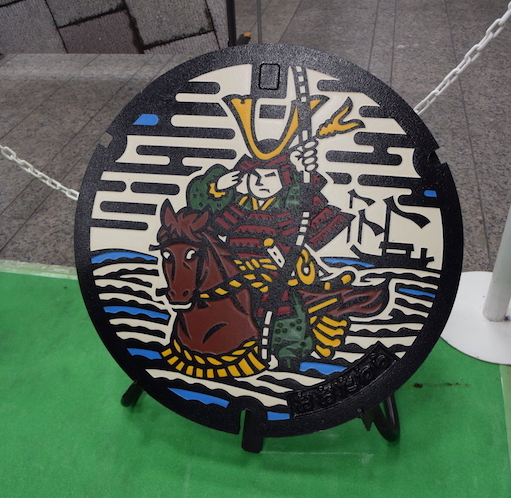 The manhole cover of Otawara-shi, Tochigi prefecture is of the Samurai warrior of the late Heian-era, 那須与一 Nasu no Yoichi, riding his horse into the sea. Famous for his chivalry at the Battle of Yashima in 1184, he was at one time the feudal lord of Tottori castle but lost his position after being defeated in a hunting competition. Otawara-shi is also known for amazing Sake, Nihonshu, having been blessed with abundant and delicious Subterranean water, naturally filtered by the Nasu renzan 那須連山. 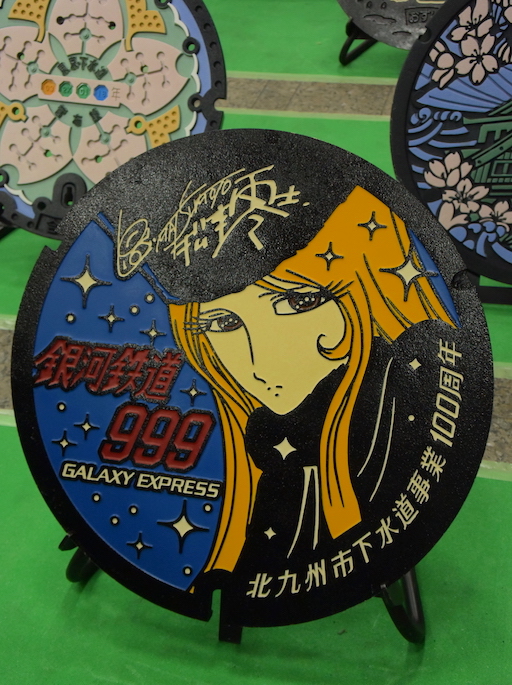 The town of Kita-kyuushuu, Fukuoka prefecture celebrated 100 years of their sewerage system and renewed their manhole covers. Nine collaborative designs were made with the popular manga Galaxy Express 999 written and illustrated in 1977 by Kyuushuu born Leiji Matsumoto. Eight of the new designs can be seen around Kokura station and the ninth at Kita-Kyuushuu airport. Galaxy Express 999 was later adapted into a number of anime films and television series and is hugely popular in Japan; Kita-Kyuushuu proudly promotes itself as the 'City of pop-culture'.

Every manhole cover from every town in Japan was on display. So naturally I checked out the ones where family live.

A colourful array of roses, the town's flower, surrounds an illustration of the extinct Toyotamaphimeia crocodile マチカネワニ（Machikane-wani) that lived in Japan during the Pleistocene. One specimen was recovered in 1964 in Machikane-cho, Shibahara, Toyonaka, at Osaka University during the construction of a new science building. The discovery of wild crocodile bones in a country where the reptile was thought to have never existed was a historic revelation. Some think the Machikane-wani could have been the inspiration for the Ryu 龍 dragon. Now a registered monument of Japan, the fossil bones reveal a reptile that was as long as over 7 metres! This excavation in its almost entirely could advance the study of reptiles for scholars around the world and Toyonaka city is proud to make it their symbol as a town that values education.

Featuring the town's tree Kinmokusei 金木犀 fragrant olive or osmathus , the town's flower Kikyo キキョウ bellflower, and the town's bird Shirasagi 白鷺 white egret, against a backdrop of a waterside scenery inspired by the town's precious spring waters of Itsukushimashissei Park 厳島湿性公園 and their abundant underground water. The white egret is a native of this region, and can be spotted fishing in the rivers and paddy fields with its long beak. The 'white egret dance', a precious form of folk ritualistic art of only a few remaining in practise in eastern Japan, is performed every spring at the 五所八幡宮例大祭 Gosho hachimangu reitaisai festival. The dance involves three animals; the lion that expels demons to create a comfortable neighbourhood, the dragon that prays for a good harvest, and the white egret, messenger of the sun, represents blessings of light and warmth that bring peace and health to society. The town of Nakai design their sewerage system amongst other efforts to protects the habitat and future of the white egret.

In 2012, a new design was made commemorating 100 years of the Nagoya sewerage system. Three designs were picked out of submissions from workers of the water supply and sewerage system, followed by a vote including the general public and the final design was selected. The motif is the Naya bashi 納屋橋 that crosses the Hori river 堀川 that runs through the centre of Nagoya city. Naya bashi has overseen the expanding and development of its surrounding area for over 400 years. There are 12 of this coloured version and 100 of the unpainted versions placed throughout the city. 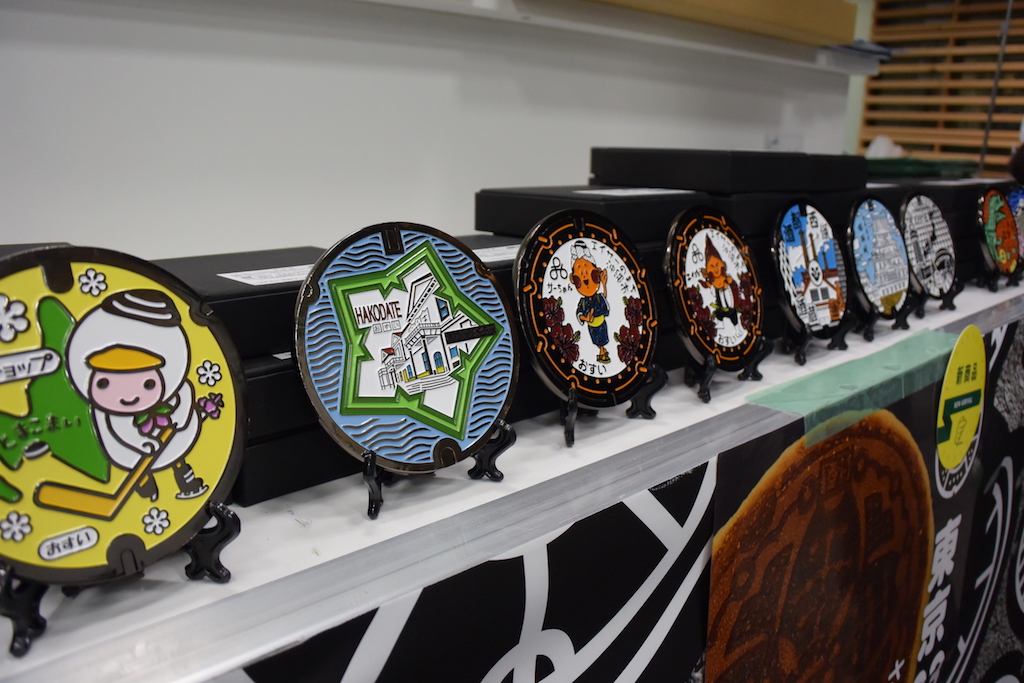 The souvenir corner was just as spacious as the exhibit area, selling everything from stickers, cellphone straps, towels, mats, biscuits, and these coasters that are miniature version of the manhole covers with exact details; they were1500 yen including tax, which comes to around £10. 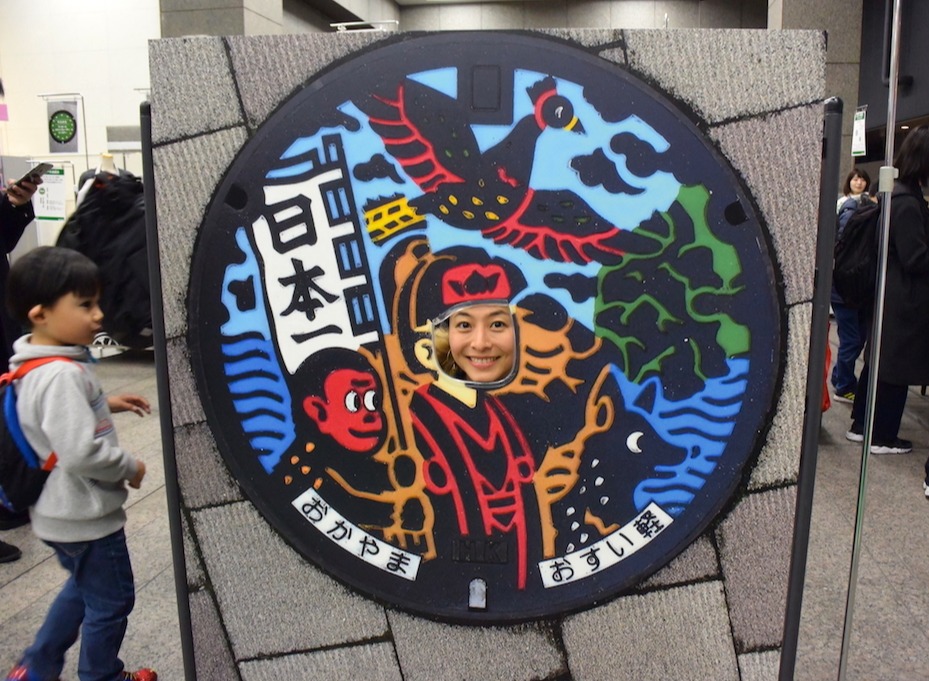 Okayama is where the fairy tale of Momotaro 桃太郎, a boy born out of a momo 桃, peach, is said to have taken place. Momotaro sets off to fight the demons of Onigashima 鬼ヶ島, with kibidango きび団子, kibi rice balls in hand. On his way he recruits a dog, a monkey, and a pheasant to assist him in his battles. I hurried out of spot after this so the sweet little boy, clearly jealous, could have his turn.

It is always fascinating to learn the history of a town, and although not often highlighted, the sewerage system is an integral part of their development. These usually overlooked and forgotten surfaces proudly stand (or lie) decorating this achievement as the face of the system representing the town and giving it character.

*Later I came across this IG account devoted to manhole covers of the world!