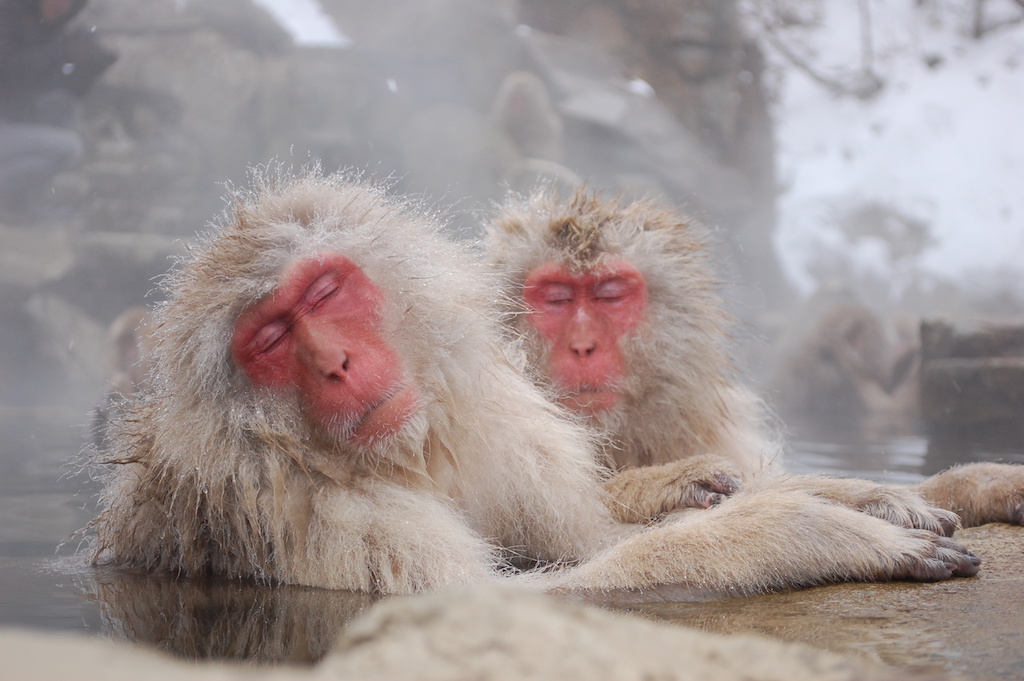 You may have come across pictures like the above, of Japanese macaque also known as snow monkeys, bathing in hot springs. Makes for a pretty image. Snow monkeys are indigenous to Japan, and are named thus because they inhabit cold regions where snow covers the land for months each year.

Monkeys also frequently appear in Japanese folktales, the most famous probably being Momotaro, about a boy born from a peach who eventually grows into a courageous young man who sets out to fight evil demons with monkey, dog, and pheasant. Another equally well-told story is The Monkey and Crab Battle, that takes place just around this time of year. 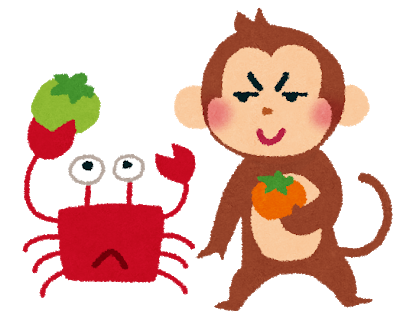 Crab was taking a walk, rice ball in hand. The conniving monkey approaches and suggests 'hey, swap your rice ball for my persimmon seed'. Crab refused at first but when monkey explained, 'It's a bargain because when you sew the seeds, it'll grow into a large tree and you'll get many more persimmons', crab was convinced. Crab swapped the rice ball for the monkey's persimmon seed.

Crab hurried home and sowed the seed, singing 'hurry hurry little seed, give me lots of persimmons, or I'll cut you off with my sharp sharp claws!' Eventually the seed grew into a large tree and bore many fruit. Monkey passed by and offered to climb the tree for the crab, who couldn't climb. Monkey scurried up the tree and started picking all the ripe fruit, but to the crab's dismay, monkey just ate them and gave crab none. When crab urged for some, monkey threw firm and unripe persimmons at crab that hit her hard. Crab was so disappointed and hurt that she died after having little crab babies.

Little crab babies were furious. They decided to get their revenge and asked chestnut, mill stone, bee, and cow pat to join them, who were also annoyed with monkey's mischiefs. They concocted a plan, sneaked into monkey's house whilst he was out and hid. Chestnut hid in the fireplace, bee hid in the water jug, cow pat hid in the hallway, and mill stone hid in the attic. When monkey returned, he went straight to the fireplace to warm his body but the fiery hot chestnut popped out and burnt him. When monkey dashed to the water jug to cool himself, bee jumped out and stung him. When monkey cursed and tried to run out of the house, he slid on cow pat waiting in the hallway, and mill stone jumped from the attic on top of monkey's head and killed him. So goes the story of the retribution of the crab babies.