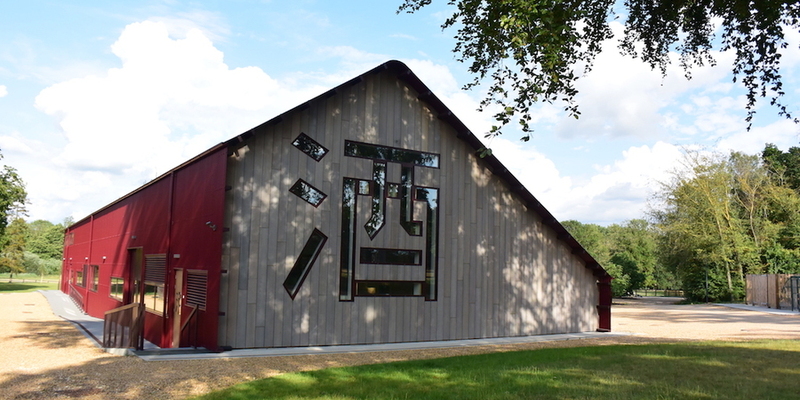 The ikisho team was invited to a tour and barbecue of the first Japanese owned sake brewery in UK, Dojima Brewery at Fordham Abbey in Ely.


We arrived at Ely, just outside Cambridge, on a sparkly sunny day. Mr Tony Mitchell, who we later learn is a kurabito 蔵人 worker in the brewery, kindly came to meet us at the station and drove us through picturesque country roads that prepared us for the stunning grounds of Fordham Abbey. The mahogany leaves of this magnificent copper beech over 300 years old was a grand sight, beckoning us to stand beneath it.


We were greeted in an elegant Georgian house and introduced to some other guests who were staying from the previous day. After a chat and some refreshing lemon water, we set off to explore the grounds.


The first stop was the pottery house under construction.


Mr Masatake Fukumori (right), the designer of the construction and pottery master, guided us around the facility. Later we were to encounter his beautiful ceramic bowls and ochoko お猪口 in various occasions from the tour of the brewery to the barbecue feast in the evening.


Mr Fukumori explained that they were working on a Japanese style room. The square hole in the floor will become an 'irori' 囲炉裏, an ancient appliance that doubles as a fire place and cooking stove. The plan for the outside area behind the room was a Japanese style 'koke' 苔 moss garden. (See our 'Picture perfect Japanese Gardens' blog for pictures!)

Two furnaces in varying sizes, as Mr Fukumori's pieces range from small cups to large and heavy serving plates. The two tools in the right picture are used to crush the soil to be sieved to remove unwanted particles to create a nice clay to work with. He uses soil procured in the UK, very much like what Bernard Leach used in his day, explaining that although the limestone content makes it crumbly and tricky to form, he welcomes and enjoys the challenge.


By this time a few more guests had arrived and we all made our way to this magnificent structure of a 'sakagura' 酒蔵, sake making facility. The kanji character spells 'sake' 酒, each stroke bordered with a magenta panel. The whole design effuses an air of sophistication, creativity, and a wonderful playful spirit.


We were happy to see Tony again, as he handed out shoes covers and the tour started. The first area was where the polishing and soaking rice happened. Tony explained that their sake is made with selected Yamadanishiki 山田錦 sake rice imported from Japan, polished to 70%, and water from the Fordham Abbey estate purified by Ice age strata which they use after the iron is filtered out. After polishing, the rice is washed and soaked for a period of time that can only be determined by experience. Mizohata toji 杜氏, master brewer, who was away on this day, decides the precise moment the rice was to be lifted from the water to control the level of absorption.


Steaming happens a day after soaking. Perfectly steamed rice will neither be too hard (under steamed) or too sticky (over steamed). Tony explained that the top half, 'seiro' 蒸篭 steaming vat, is made in Japan and the bottom half 'kama' 釜, electric steamer, is made in the UK. After steaming, a percentage of the rice is taken into the 'koji muro' 麹室 a 35 degrees room where the rice is sprinkled with yellow koji mold and cultured. The temperature of the room is checked regularly over a 48 hour period which is an exhausting but very important job. The rice is mixed to let out excess heat and the mold grows into and around the rice. Sake rice is fairly bland in taste but this process transforms it into koji which is sweet to the taste and has the fragrance of chestnuts. After 48 hours, the koji is ready. Usually sake is produced in the cold months, from October to April. This time of the year the focus is on making koji to be dried and frozen for use in the later months.


There is a saying that refers to the order of importance in sake making; 'first koji, second moto, third brewing’ 一麹、二酛、三造り. The 'moto' or 'shubo' 酒母, is the seed mash or mini-fermentation to help get it going. It is made in a special container and mixed everyday, stirred, sampled, analysed for acidity, sugar and taste. The taste changes and develops every day and after ten days the shubo is complete.


The next step is 'Sandanjikomi' 三段仕込み.  On the first day, the shubo, rice koji, steamed rice and water is combined and mixed into a mash. The second day is a day of rest (or dance, for the sake to meld). On the third and forth days, more steamed rice and water is added. The vintage Junmai Sake Cambridge is brewed using Junmai Dojima Sake instead of water and is aged for 3 to 5 years!


After 'sandanjikomi', comes fermentation, which happens in the above facility. Every morning around 6 to 7 am, Kurabito Tony will visit the tanks to say good morning as they releasing carbon dioxide creating foam on the surface, effusing banana like fragrances. Tony fully engages his senses to take temperature, control acidity and sugar levels, and taste the sake for 18-22 days until he decides they're ready to be pressed.


This pressing machine is brought over from Japan. The sake is packed in sheets that are heavy, slippery, wobbly, like a 'big fat sausage' so it is with great skill that they are placed into the boxes to set to apply pressure. The sake drips out of the outlet at the front. The first exquisite drops of fresh sake is called 'arabashiri' あらばしり and it is the moment of joy for Kurabito after all the hard work and sleep deprived days. Tony explained that it tastes fantastic, slightly cloudy and is vigorously alive like a new born baby. When a member of our tour group asked if they'd ever be lucky enough to try the 'arabashiri', Tony replied if they helped making the sake and happened to be around on pressing day, it could be a possibility. There was a moment of gasping and eyes lit up but after rapidly flicking through the labour intensive process up until this point, we probably all thought, maybe not :)

Pressing is followed by pasteurisation. The Dojima Junmai (dark bottle in the right picture) is pasteurised once in 65 degrees for five minutes. The clear bottle is unpasteurised nama Junmai Cambridge vintage. Tony explained that pasteurisation had already existed in Japan 300 years before the technique was supposedly 'invented' and named by the French chemist Louis Pasteur in 1864.


We were led upstairs to a beautiful room overlooking the brewing room, laid out for the next exciting stage of the tour, tasting!


A beautiful collection of sake vessels and cups, interspersed with elegant calming sculptures created by a friend of the founder of the brewery.

Everything in the Sakagura had been polished to a shimmering shine, a testament to the care, devotion, and dedication of everyone involved, to brew the best possible sake. Later on in the day we were invited to a wonderful barbecue accompanied by the glorious sake. Yes, Sake is not just for sushi, sashimi, and Japanese food. It can be paired with all sorts of dishes from vegetarian to meaty, depending on the flavour, texture, acidity... etc, it is versatile and enjoyable just like wine.

From left, Mr Bon Yagi, restauranteur and entrepreneur from New York, Ms Kiyomi Hashimoto, CEO of Dojima Brewery, and ikisho founder Tetsuro Hama. It was a truly magnificent day in the country, in amazing company and gorgeous replenishing surroundings. I'm in awe that my first sake brewery tour happened in England!

If you would like to learn more about the brewery and their delicious sake, please visit Dojima Sake Brewery website.