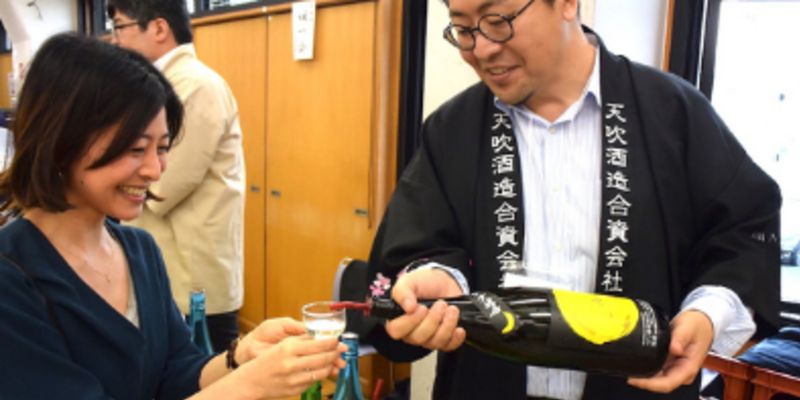 On a gloriously sunny Sunday that felt like summer was upon us, I partook in a sake tasting event held in a town facility in Setagaya, Tokyo. 16 breweries from around the country gathered to offer their prided sake; from Akita, a mountainous northern prefecture on the main island of honshu, to Saga prefecture in Kyushu, the most southwestern of Japan’s main islands.


The leaflets handed out included the details of every sake available for tasting, and the above illustration of 'how to kikizake (taste sake)'; ①Observe appearance ②Check aroma ③Roll on tongue to taste flavour ④Identify aromas through orthonasal olfaction (breathing through nose) ⑤Spit out and note the after taste ⑥Practise! and become a master kikizake-shi!


It is generally thought that sake made in the north tends to be dry and sake brewed in the south leans towards a sweeter flavour. Although this also varies greatly depending on the sourced rice, water, and the traditional techniques inherited by the 'toji' 杜氏, the chief brewer at a sake brewery, of each region.


The northern most brewery participating was serving one of my favourite brands, 'Yukinobousha' 雪の茅舎. The Saya brewery, 齋彌酒造, in Akita prefecture has become famous for this brand from which they had brought three types; Junmai ginjo 純米吟醸, Bishu no sekkei Junmai ginjo nama genshu 美酒の設計純米吟醸生原酒, and Hiden yamahai Junmai ginjo 秘伝山廃純米吟醸. All relatively low in nihonshu-do 日本酒度, +1, +2, +0.5, respectively, meaning they are on the dry side. All three were served chilled from plastic containers where ice was added every now and then. Junmai ginjo, the standard of the brand (left of the three boxes) with hints of apple, light textured and crisp, would be wonderful with sushi and sashimi. Bishu no sekkei (middle box) proudly displayed its fresh nama-ness, fruity, smooth, and rich with a flavourful after taste that lingered wonderfully. Hiden yamahai (right box) had low acidity for a Yamahai, rich aroma that may be better served room temperature. The brand a reputation for being well balanced

Most brewries had brough two or three types of sake so I decided to ask which was the best to start with. The very left red label 'Takachiyo Karakuchi Junmai' from Takachiyo Shuzo Brewery 高千代酒造 of Niigata, was listed as a  whopping nihonshu-do +19 which was the highest in the room. 'Karakuchi' 辛口 means 'dry' so we were warned. I got distracted and failed to taste it! but the shiny blue label, 'takachiyo SKY' on the right was lovely. A Nama genshu, 生原酒, unpasteurised and undiluted, it was clear and fresh, full of umami. Takachiyo Shuzo use a very rare Shuzokoutekimai 酒造好適米 (suitable rice for sake making) that was developed in Niigata in 1993; a cross bred grain of Shuzoukoutekimai 'Gohyakumangoku' 五百万石 and 'Houhai' 豊盃, named 'Ipponjime' 一本〆.

Osawa brewery 大澤酒造 from Nagano were serving their sake in two ways. The brick coloured box on the right is an electronic warming device. The sake was poured into the silver one handled vessel, placed into the box that has heated water and left until warmed to desired temperature. It is truly amazing how the temperature affects the taste and aromas of sake. I tried the right bottle, La Vie en Rose, junmai, in two different temperatures; chilled and warmed to body temperature, hitohada-kan 人肌燗. While the refreshing fruity aroma stood out when chilled, the warmed version felt smoother and the aroma was more of rice, that spread like a cloud of umami that was absorbed instantly. A slightly lower alcohol content of around 13%, this sake is marketed as good for beginners and white wine lovers and great paired with western food.


The above is a general guide to different temperatures that sake is served and how they affect aroma and taste. Although this will differ depending on each sake and individual tastes will also come into play. Most households don't have a special warming device, but a saucepan filled with hot water would suffice or even small batches of microwaving but be careful it doesn't get piping hot. A safe and easy way to start may be to compare chilled and body temperature; sip a sake served chilled, then warm the ochoko お猪口, sake cup in your hands to see how it blossoms.

I'm not going to hold back, Kobayashi Shuzo brewery 小林酒造 from Tochigi, was my favourite. Three types from their famous Houou biden 鳳凰美田 brand were served, and the Junmai Daiginjo nama, made with the popular sakamai 酒米 (sake making rice), Yamadanishiki 山田錦 polished to 50%, had a gorgeous melon like aroma, was mellow and smooth on the tongue, and had an elegant long after taste. Depending on the season, it is produced Hi-ire 火入れ, pasteurised which I'm curious to taste too!

The 'Tamagawa' brand may be known for their summer sake 'Ice Breaker' that is exported world wide. The Kinoshita brewery 木下醸造 of Kyoto, lead by the legendary Toji, Philip Harper, continue to use the 'kimoto-kei' shubo 酒母 yeast starter from the Edo era. As mentioned in our Tempura Blog, 'Kimoto-kei' adopts the traditional slow fermentation technique at low temperatures instead of using the 'fast-developing' shubo which 90% of sake brewed in Japan is produced with. Laborious yet rewarding as the resulting sake is rich, aromatic, and full bodied. Their warmed sake would be perfect accompanied with food, especially oysters that the Kumihama bay, a few minutes walk from the brewery, is famous for.


We learn a few days after the event that Uragassan 裏月山, junmai ginjo, by Yoshida shuzo brewery of Shimane was voted No.1 by the participants of the Kikizake kai (displayed above by the server from the said brewery). Shimane prefecture is known as the land of gods, home to Izumo taisha shrine, one of the most ancient and important Shinto shrines in Japan. It is mentioned in the oldest chronicles of Japan, Kojiki 古事記 and Nihonshoki 日本書紀 as playing a vital role in the communications of the gods. Izumo taisha is the shrine of en-musubi 縁結び, bringing people and things together, and the brewery designed this sake with hopes to draw closer the brewery, sake stores, and consumers. The photographs on their website are so beautiful I cannot resist sharing, although it's all in Japanese. Uragassan is fresh fruity aroma, the palate is a rich mix of savoury umami and faint bitterness with a dry finish that leaves a lingering layer of umami in your mouth that makes you want more!

Junmai ginjo, Ginpuu, hi-ire genshu 純米吟醸 吟風 火入れ原酒 (far right, standing outside box and right picture) is made with Ginpu rice from Hokkaido polished to 55%. The Takeda brewery 武田酒造 is in Ehime in shikoku island, south of Japan near the ocean, which makes their rice farmers as far as Inverness to London and back, in other words around 2000 km = 1200 miles. While most breweries use rice that is cultivated in the region, it was interesting to see how they chose this particular rice. A brewery known for producing bold sakes full of character, this 2-year-aged sake had an elegant mild aroma with hints of citrus, a honey like sweetness and refreshing tartness. A light fragrant sake when served chilled, while rich aromas are highlighted when warmed.

Amabuki shuzo 天吹酒造, of Saga, Kyushu use unique kobo 酵母 yeast. They had brought three types from their Amabuki brand 天吹銘柄. From left; 1) Tokubetsu Junmai chokarakuchi nama 特別純米超辛口生 made with Yamadanishiki polished to 60% and Begonia kobo 2) Junmai Ginjo made with Jugemu 寿限無, a sakamai harvested in Kyushu, polished to 50% and yeast from the flower 'marvel of Peru' 3) Junmai Daiginjo nama made with sakamai Hinohikari polished to 50% and banana kobo. My all time favourite fruit in sake was something to be excited about. I had actually started with this sake, not being able to resist it and enjoyed the distinct banana flavour with depth and lots of umami. I returned to it as the event came to a close, so I could leave with banana taste in my mouth. I think this would be excellent poured over ice-cream!


Parts of the Amabuki shuzo's website is available in English, another site full of beautiful photographs.

There was a drawing where sake coupons and T-shirts were won, but unfortunately my number wasn't picked.


Sake is said to be one of the most complex alcoholic beverages to produce that calls for much skill. The type of rice, the ratio it is polished, type of kobo, brewing technique, and alcohol content all affect the end product. Some breweries call their process 'sodateru' 育てる, rearing or raising like you would a child. Such an intriguing drink that I intend to drink more to learn more!