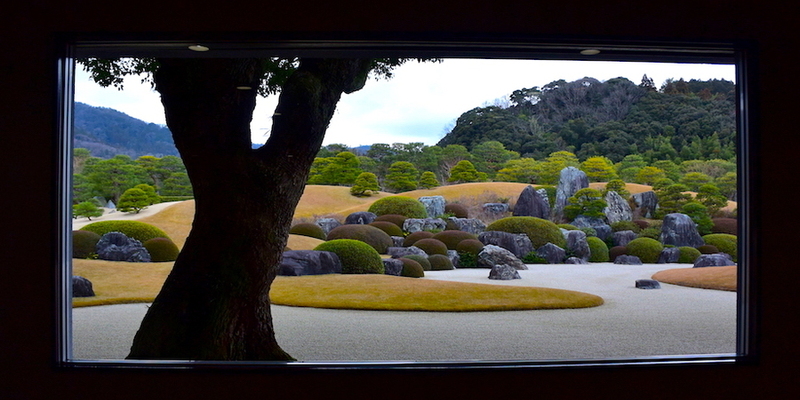 Japanese gardens are celebrated and adored in many countries. London alone has quite a few - there's one in Regents Park, there's The Kyoto Garden in Holland Park, The Japanese landscape in Kew Gardens, there's even a Japanese roof garden at SOAS University of London (School of Oriental and African Studies) just to mention a few. BBC 2 has a television programme that talks about some of the most famous gardens in Kanazawa, Ishikawa prefecture in Japan.


Last month we visited one of the largest in scale and diversity that I've ever seen - one that has been honoured as 'Japan's No.1 Garden' by The Journal of Japanese Gardening for the 16th consecutive year since 2003!


Adachi Museum of Art 足立美術館
Entrance to Adachi Art Museum, with a teaser of a garden


In Yasugi-shi of Shimane prefecture in Chugoku region, western Japan, is Adachi Museum of Art that houses perhaps the most extensive collection of Japanese paintings by Yokoyama Taikan and Hashimoto Kansetsu. It is dazzling and especially so because of the setting. The gallery is designed so that between rooms of paintings, one steps into a corridor or outdoor area where the magnificent garden of around 165,000 square metres in total can be seen from various angles or through a carefully placed window. There are four main areas that encompass distant mountains as a part of the garden landscape: The Dry Landscape Garden, 枯山水庭, The Moss Garden, 苔庭, The White Gravel and Pine Garden, 白砂青松庭, and The Pond Garden, 池庭.


The museum was founded by Zenko Adachi, a prominent business man who was born and resided on the grounds it now stands. His great appreciation for the arts and passion for designing gardens since his youth, resulted in this establishment. He described the gardens as, 'living Japanese paintings'.


生きた日本画 Living Japanese Paintings
The two above pictures were taken through windows from corridors adjoining galleries. The serenity and perfection of the gardens indeed, make them look like paintings. The audio guide explained that the pine trees, in the second picture, are slanting because they were planted in exactly the same angle to the gravel as they were in their natural habitat, to sustain their strength.


The Japanese doors, shouji, 障子, add an extra flair. I can imagine Mr. Adachi sitting here meditating or planning his next venture.


This was my favourite 'living picture'. The blackness of the tree in the foreground makes a dramatic comparison to the lighter colours. The hedges are an exquisite perfect round - and it is worth noting there is not one single stray leaf!


We're guided out into a courtyard between galleries with large surfaces of rock covered in fluffy looking vibrant moss. I learn that the Japanese culture is rare in its appreciation and cultivation of this plant that commonly grows in abandoned shadowy places where few feet have trodden. There are said to be 18,000 species of moss in the world and 1,800 of them grow in Japan, where water is abundant and the climate relatively humid throughout the year. The flowerless plant makes appearances in Japanese poems, 和歌, waka, and is also mentioned in the National Anthem of Japan, 'Kimigayo' 君が代 - and befittingly so, as its association with dilapidation, rotting and ageing appeals to the Japanese sensibility that sees beauty in natural states of imperfectness and transience.


The Pond Garden was home to many well fed koi fish. The restaurant 'Taikan', on the left, had a wonderful view of this garden. It was no secret they were serving Japanese curry, as half of the museum was filled with its aroma. By the time we approached the restaurant, tummies were rumbling in anticipation.

The Pond Garden in the foreground. In the back, the White Gravel and Pine Garden that depicted the artistic sensibilities of Taikan Yokoyama.


Natural and beautiful camouflage! I was intrigued with this screen that was placed in a corner of the garden that sectioned off an area with outdoor air conditioner units and other unsightly modern appliances.


After exiting the wonderful museum shop that sold an array of handkerchiefs, plastic folders and postcards of the masterpieces exhibited in the museum, was this bamboo garden with a refreshing gushing waterfall - which I realised was the first of any sound. There was no mention of it in the audio guide, but it made me wonder if there was a reason for the inviting interval to the silence and tranquility.

Unfortunately the magnificent pictures were off limits to photography so I'll end with a delightful cluster of Sarcandra, 千両, Senryo, found in a corner of the bamboo garden. Believed to bring good fortune, this evergreen plant is favoured as part of New Year's celebration decorations in Japan.


Our visit was in mid-February - the gardens will now be looking more colourful and Springy no doubt. The Adachi Museum of Art's website has a 'live camera' where you can see the garden today.