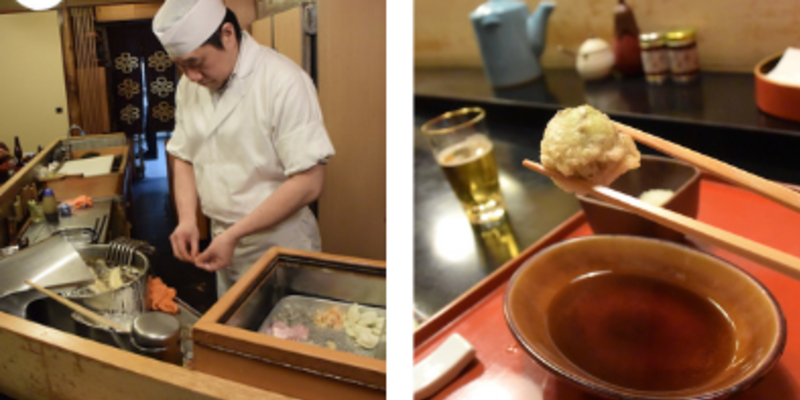 Light and Crunchy Tempura by the Tempura Master Chef

Another well-known and much loved Japanese food, Tempura.


In the hopes of one day being able to secure portable equipment to include the delicacy in ikisho experiences, we visited one Tempura restaurant that has been in business for over 110 years.


The black timber facade through which we can see glimpses of the interior feels very promising.

The course starts with a sakuzuke, 先付け, of eel in 'kanten jelly', 寒天, with aromatic Japanese pepper bud. It may sound similar to the British dish 'jellied eel' but it tastes very different. Kanten is made from seaweed and has a much firmer texture than jelly. The kanten is mixed with a light bonito based broth that gently holds the eel within it, and the pepper bud adds aroma that bursts in your mouth and a welcome freshness.


Then sashimi, 刺身, was served, on a small plate decorated with pine needles. The fibre that can be seen in the wasabi is proof that it is freshly grounded and not a mixture made from powder! The maguro tuna, 鮪, was rich and thick, leaning towards toro, medium fatty tuna.

The first tempura served was ebi, 海老, shrimp. A sweet soft shrimp cooked rare to crunchy perfection. The tail is also a wonderful treat if done well, which this was.

Followed by 'fukinoto', an edible flower bud of the 'fuki' plant (Giant Butterbur) and early spring delicacy. Slightly bitter, succulent and embodying Spring energy, the bursting flavour is something I find myself craving this time of year. They seem to almost provide a sort of antidote to seasonal allergies.

Then came the heads of the earlier prawns. Severed and fried separately, the legs have been separated to create a flower affect.

'Nanohana' 菜の花, rape blossoms, cooked in a light broth was a very welcome interval in the crispiness.


The bowl on the left is 'tentsuyu', 天つゆ, broth for dipping tempura in, and the shallow blue and white striped plate is rock salt and Japanese pepper. As each tempura is served, the chef advises how it's best enjoyed, either with the broth or salt, with or without pepper. I couldn't resist trying different ways for every piece, and found they really made a difference. Sometimes one was dramatically better than the other, other times they were both just as good!

Just as we were discussing how fresh the oysters were in Whitstable last summer, along came these enormous oysters, at least 8cm long. This was very exiting as I'd never had oyster tempura before. A popular Japanese dish is 牡蠣フライ, literally 'oyster fry' which are oysters fried in a thick batter and fried until golden. The chef explained that oyster tempura has a lighter batter and the short frying time results in an almost rare texture. He was right! This was best enjoyed with a dip in the salt. Of course the blotting paper was changed every few servings to ensure it soaked up any extra oil, keeping the tempura beautifully crunchy.

At which point, we decided it was time to order some 'nihonshu', 日本酒, Japanese sake - and what a delightful list we had to choose from! What we often do when mesmerised with choice, is to go for a 'junmai', 純米, which means it's made purely with rice, koji and water with no additional alcohol, and then pick out a name that sounds fun, relevant or exciting.

We chose 'Tanakaya', 田中屋, a sake made in Miyagi prefecture, curious to try a 'Yamahai Jikomi' 山廃仕込み sake, made with the traditional slow fermentation technique at low temperatures instead of using the 'fast-developing' shubo, 酒母, (yeast starter) which 90% of sake brewed in Japan is produced with. The Yamahai method is laborious, time-consuming, and harder to control, demanding much skill and experience; but the sake made with it is known to be have a richer bolder flavour with more depth and aroma and regarded as the best type of 'junmaishu' by some sake lovers. It was indeed very complex and aromatic, a little on the dry side and a perfect match with the oysters!

The shiitake mushroom was fleshy and full of umami, again, complimented the sake and by the sake.

The 'shime', シメ, that is served at the end to top it all off, was a 'kakiage' かき揚げ, cluster of shrimp tempura on rice with miso soup and 'oshinko', お新香.


Desert was home made ice cream with 'kinkan', 金柑, mini citruses that can be eaten whole that had been pipped, frozen and thawed slightly, that were incredible with the ice cream.


It was a treat to be seated at the counter where we could marvel at the swift movements of the tempura chef. The tempura at 'Tenkane', Shinjuku, Tokyo, use a particular type of sesame seed oil for frying. Made in a painstakingly arduous process starting with careful toasting by the master craftsmen who make precise adjustments depending on the humidity and temperature in a room full of natural light so they can detect the slightest changes. After several stages that could easily make a full blog post in itself, comes the oil extraction known as 'tama shime shibori', 玉締め絞り. A traditional slow, low pressure, room temperature method that results in a clear amber coloured virgin oil full of nutrients and flavour. Less than 1% of sesame oil on the market in Japan is extracted in this way today. This probably accounts for how light I felt after a full course of tempura (the course included another three tempuras).


Conclusion: It will not be an easy task to incorporate this level of tempura into our services. Tempura is a whole other art requiring a completely different set of skills, demanding an equal amount of precision, expertise and knowledge as sushi. Our hunt continues...