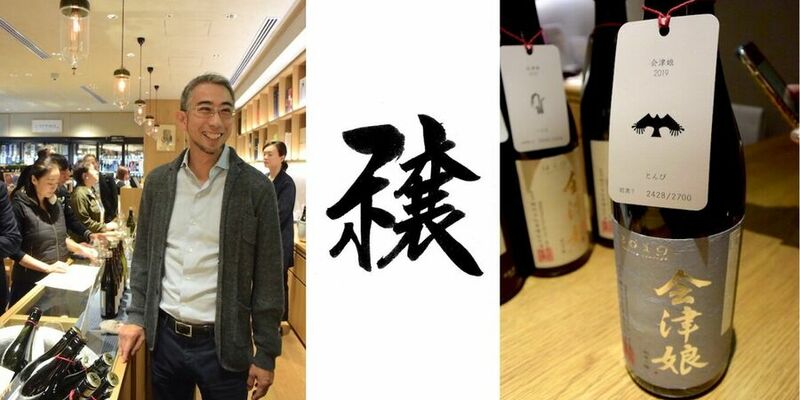 
Terroir of Sake
Aizu musume Jo 会津娘 穣 is a series of Sake created by the reputable Japanese sake brewery 'Takahashi Shousaku Shuzouten' 高橋庄作酒造店, in Fukushima, the southernmost prefecture of Tōhoku region. Every bottle of Aizu musume Jo is made from rice grown in one single rice paddy. As every rice paddy is unique, receiving varying amounts of sun, wind, and wild visitors, combined with different water retention rates, soil composure, and farming methods, subtle differences in the resulting sake can be enjoyed. In other words, it incorporates the idea of terroir, well observed in wine-making- it will be interesting to follow this new movement in sake.


The rice paddies are numbered from the north, and the difference in colours represent different soil types. Each white sign on the illustration of the rice paddies is where a single rice paddy sake was created, listed with images of the bottles beneath the map with corresponding explanations. The red flag in the middle is the brewery.


Aizu musume is a well-known sake that is so popular sometimes reservations must be made in order to secure a bottle. Loved by the locals, precious few are shipped out of Fukushima.


Tasting sake from different terroir
I joined a wonderful tasting event at Imadeya, in Ginza, Tokyo. An established sake shop known for their curated collection of sake, wine, beer, umeshu, shochu, and whiskey. They also have a beautiful selection of alcohol related tableware that are available for purchase. The following six types of Aizu musume Jo were served;


All Aizu musume Junmai sake are made with the rice Gohyakumangoku 五百万石, a grain known for its early harvesting and is the second most cultivated sakamai 酒米 (rice for sake making) in Japan. Each brew is made with exactly the same seimaibuai 精米歩合 (rice polishing ratio) of 60%, same yeast, and process, in carefully monitored environments with controlled levels of humidity and temperature. The single difference being the paddy the rice is from.


The bottles were chilled in a metal bucket packed with ice.

The tasting started from the left, moving from light and refreshing to stronger and richer flavours. Generous portions were poured into our glasses that looked similar to a Bordeaux wine glass, and aromas exploded. Fellow participants were jolly people who clearly loved drinking sake, and I ended up making some good sake friends.


Each bottle had a unique label with a drawing, representing key aspects of the paddy. The above is Tonbi 鳶, the Japanese name for the bird kite, as this particular paddy is often visited by kites.

Each label had a QR code on the back, that holds coordinations so you can find the exact location of the paddy!


Aizu musume Junmai sake have an elegant fruity aroma of banana and peach, a slightly dry, crisp, and vibrant taste with lots of umami, with a beautiful lingering after taste. In short, they were divine. I think they would be a great match with sashimi and other raw fish dishes, or maybe warmed a little and accompanied with nabe 鍋 hot pots. Read more about nabe in our nabe blog

About 'Takahashi Shousaku Shuzouten' 高橋庄作酒造店
The brewery sits in Aizu bonchi 会津盆地 (Aizu basin), surrounded by large and small mountains, with many rivers flowing through providing abundant underground water. A typical basin climate with hot summers and cold winters, the area is said to have over 100 days in a year that are above 25 centigrade or below 0 centigrade. Unfortunately the brewery lost most of their written records in many fires but it is believed the brewery was established around Meiji 8 (1875).


Their production follows Dosan doho 土産土法, which means 'produce yielded from a particular region is prepared and eaten in the way particular to that specific region'. In the case of Takahashi Shousaku Shuzouten, they use produce and water made and drawn from the local area, brewed with local techniques by the local people. This is rare in sake making, as many breweries a) buy the rice and b) from farmers who are not necessarily local. Unlike how grapes greatly affect the resulting wine, in sake-making, rice is not thought of as a big factor that affects the end product. There is the saying 一麹、二酛、三造り, that refers to the order of importance in sake making; 'first koji, second moto, third brewing’ also mentioned in my previous blog The first Japanese owned sake brewery in UK . Fifth generation Toji 杜氏, Mr Wataru Takahashi explains that if cultivated with care, each paddy is so different, the yielded rice is bound to be unique. His pursuit of an unconventional path is bold and courageous.


Honestly, every single cup was delicious. When I expressed this to the president of Takahashi Shousaku Shuzouten, Mr Wataru Takahashi, he smiled and replied, 'yes, they're all from the same rice!'.


I asked Takahashi-san what sort of food he'd recommend pairing his sake with. He shared that whatever comes to your mind when tasting the sake - but he often pairs root vegetables and horse meat sashimi or tataki, slightly seared sashimi. Horse meat is a popular delicacy of Fukushima and Aizu. Another question I had was the recommended serving temperature. He explained that as he believes freshness is very important to hold in the characteristics, the sake is bottled with a very small amount of carbon dioxide. To enjoy the slight fizziness, the sake is best enjoyed chilled when first opening. After the carbon dioxide has subsided and the aroma has blossomed, it is also quite wonderful warmed slightly to 38-48 degrees. Characteristics of sake can be less apparent in room temperature but different temperatures bring out different qualities of the sake, so it is advisable to experiment and find your perfect way to enjoy!


We find cups can also make a very big difference. The Bordeaux wine glasses brought out the fragrant Aizu musume beautifully and enhanced aroma and texture.


Let us part with some wise words I found on the little leaflet of Imadeya Ginza;


Man, being reasonable, must get drunk; the best of life is but intoxication