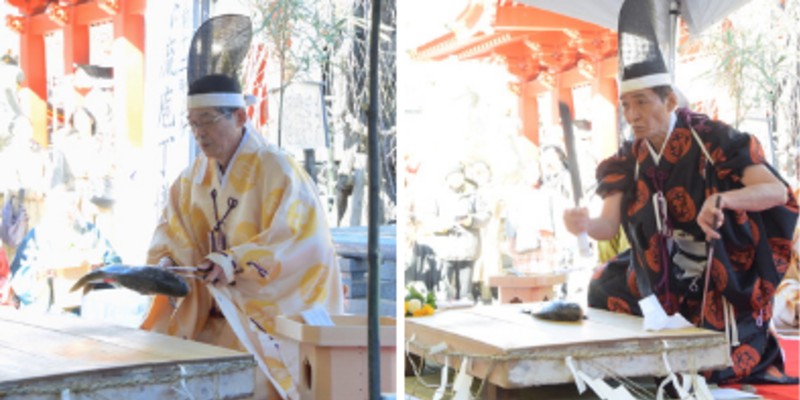 'Hocho-do', 包丁道, is the traditional Japanese culinary art form of filleting a fish or fowl without touching it with one's hands; and the Shijo School is the oldest among the schools. This Shinto 神道 ritual is held at 'Kanda Myoujin' 神田明神 or Kanda Shrine in Chiyoda, Tokyo, every year on a Sunday in mid-January, so I went to visit.


It is a chilly and windy but gloriously sunny Sunday. In fact most of January has been dry and sunny in Tokyo, making me crave rain having grown up in London. I arrive at the Kanda Myoujin wrapped in a long puffer ready to brave the afternoon watching this out door ceremony. Daikokuten and Ebisu are two deities enshrined here. Both belong to the Seven Gods of Fortune making Kanda Shrine a popular place for business people and entrepreneurs to pray for wealth and prosperity. A crowd has gathered around the area where the ceremony is to take place; everyone is trying to secure a vantage point.


Crowd gathering to see the ceremony


Dating back to the first century
The ritual is mentioned in old manuscripts like 'Genji monogatari', 源氏物語, The Tale of Genji, that was written in the early 11th century. From many scripts this this, we learn that Daimyo lords performed it to welcome their important guests; by taking the knife themselves and displaying their skills, filleting ingredients that were then cooked by their private chefs and served to their guests.


A procession of men dressed in costume disappeared into the main shrine, in the right corner, for prayers for a good 20 minutes.


They then reappeared and sat down like you would for a class photo.


An elderly gentleman in the middle guided the audience through the ceremony, explaining the ritual. The ritual performers are dressed in Heian period clothing that is also the ceremonial dress of the Shinto priest; an 'eboshi', 烏帽子 hat and 'hitatare', 直垂 robe. The hitatare has long sleeves and a drawstring, which is used to tie the sleeves back during the ritual.


A gentleman takes the stage, graciously cleanses the board and places the auspicious koi fish, 鯉, on the cutting board, deftly using only a hocho knife and steel chopsticks.


Next, the hocho knife and chopsticks to be used by the Hocho-nin, 庖丁人, knife master, and a bunch of chrysanthemums are brought on. They are carefully placed on the board in their particular positions, including the paper that will be used to clean the insides of the koi fish, and we're ready for the main act.


The 'hocho-nin' takes the stage with his 'kouken', 後見, attendants, and readies his garment while they watch intently.


Swiftly positioning himself in front of the board, he starts by moving the chrysanthemums to a corner, then takes the instruments as he elevates quickly onto one knee.


A series of grand movements ensue. Including this surprising movement of spinning the blade right around past his face that was repeated throughout the ritual. It was explained as being called 'hocho kaeshi', 庖丁返し, 'turning the knife', and it serves as 'ittou ichirei', 一刀一礼, literally meaning 'each slice each prayer'.


He commences by cleaning the inside of the koi fish with the paper, neatly folded it by just using the steel chopsticks and carving knife.


and there were moments like this where it could only be seen as communication with his hocho.

Then in one swift motion and a crack, the koi fish head was chopped off and placed carefully in one corner of the board where it remained until the end. He proceeded to work on the rest of the body, which was first cut into eight pieces. Rules, method and formalities of knife and chopsticks have not changed for the 450 years the ritual has been carried out.


Each piece is cut further, into a total of 36 pieces - matching the number of scales on a koi fish. 'Shijo-ryu' 四條流, is unique in this number, other schools cut it up into less pieces. We also learn that other fish like 'suzuki' 鱸, sea bass, 'tai', 鯛, sea bream, 'managatsuo' マナガツオ, butterfish, and 'shake', 鮭, salmon are also commonly used in the ritual but koi, 鯉, is regarded the finest. 'Tsuru, 鶴, cranes are no longer chosen as they are an endangered species, but pheasants and ducks are sometimes used.

As the action proceeds we see parts of koi fish all over the board - every piece has it's designated spot where it is placed attentively. The right posture is another we see the knife master take on a few occasions - his concentration was contagious.


It concluded with a series of movements that were described as '鯉にを闘志を入れ、庖丁にて邪をはらう所作', projecting fighting spirit on to the koi fish and dispelling evil.

He then retreated to his first position between his attendants and untied his garments, which was followed by a group bow towards the koi fish in appreciation of it's offering.

The koi fish in 36 pieces was left like the below for the audience to look at up close, instead of being taken into the kitchen to be cooked. The whole process took around 25 minutes. Apparently there is no official written documentation describing how the ritual should be performed. It has been handed down by word of mouth and although there are unofficial notes that survived, they are written in half 'bukkyo-kotoba' 仏教言葉, Buddhism language, and half 'shinto-kotoba', 神道言葉, Shinto language and is an arduous read that can be interpreted in many ways.


There was no moment of hesitation, no fidgeting, no unnecessary movements - the knife master was smooth and precise all throughout. It was an exhilarating watch. The mastery and skill shows much respect and appreciation to the fish. Fish, sashimi and sushi prepared with such ceremony much taste extraordinary!


The ceremony ended with 'gagaku' 雅楽 music, old classical music also known as ancient imperial court music, played by three young men in ceremonial dress, on 'fue', 笛, flute, 'sho', 笙, mouth organ, and 'ryuuteki', 龍笛, transverse flute. In another area of the shrine, 'takidashi' 炊き出し, offering of 'tonjiru', 豚汁, pork soup, started. We hurried to join the queue of people hungry for the warming food, that formed in a matter of seconds.


Then I spotted a sumo wrestler purchasing a lucky charm.


It is always fascinating to see how a 1300 year old shrine survives and adapts as part of the community. Often in Tokyo we see ancient structures against an urban backdrop. Everything exists together in a uniquely harmonious way. Many residential areas are a huge jumble of tall apartment blocks, smaller scale flats, old style Japanese wooden houses and concrete terraced housing. All looking completely unrelated to each other, yet neatly standing side by side in peace. Which reminds me of the last line of a poem by 'Misuzu Kaneko', 金子みすず, a Japanese poet and song writer. 'みんなちがって、みんないい' - 'We're all different but we're all good'.