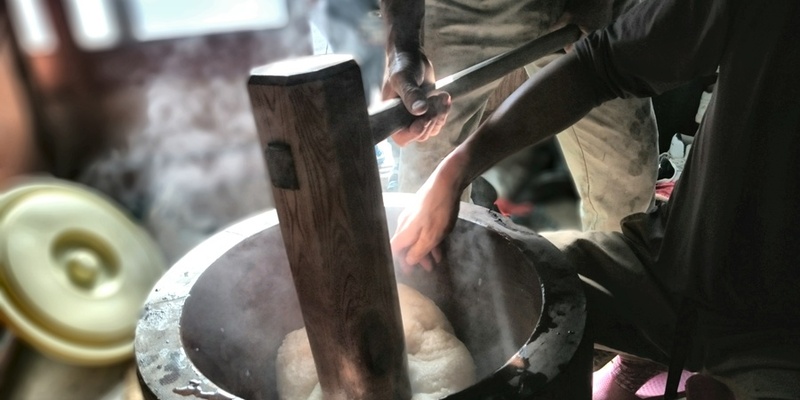 
'akemashite omedetou gozaimasu'
is the official greeting throughout January, to everyone you see for the first time in the new year - regardless of how late in the month it is. It is usually continued with 'kotoshimo yoroshiku onegaishimasu' 今年もよろしくお願いします, 'looking forward to our continuous friendship/working relationship/dealings/business/etc this year'.


The first time that anything is done in the new year, is a 'hatsu' 初 - 'a first'. The first bath of the year is 'hatsu-buro' 初風呂, the first visit to the shrine or temple is 'hatsu-moude' 初詣, the first dream is 'hatsu-yume' 初夢, the first sunrise is 'hatsu-hinode' 初日の出... you get the picture...


'Oshougatsu' お正月 is the name for the New Year's period in Japan which usually represents the first three days which are also called 'sanganichi' 三ヶ日. Shops and businesses used to close on these three days - it was the much needed holiday for the hard working nation. Nowadays many large retail shops and supermarkets open for the opportunity to make business with less competition.


Christmas celebrations have become so big in Japan, that New Year's Celebrations that used to be the grandest of the year feel as if they have been pushed aside a little. It's not until after the 25th of December that any New Year's ornaments or decorations start appearing anywhere - but when it does, it does! Unlike how Christmas lingers for 12 days after the 25th in some cultures, the country is transformed over night. Wreaths on front doors are swapped for 'kadomatsu' 門松 New Year's pine decorations, or other special ornaments, Japanese confectionary stores switch to selling sheets of freshly pounded 'mochi' 餅 to be eaten with 'osechi ryori' 御節料理 New Year's celebration food, and some of us finally start to write 'nengajo' 年賀状, New Year's Greeting postcards.


New Year's food is colourful and plentiful and full of auspicious meaning but the most famous, favoured and widely eaten nationwide is 'mochi', 餅, sticky rice cakes. The stickiness represents perseverance and the stretchy quality symbolizes longevity - but that aside, mochi is by far my and many of my friends' and family member's favourite New Year's food. Sheets of plain mochi is stocked in every home to last the entire New Year's holidays to be devoured in numerous ways that delights all!


The above picture shows how mochi was prepared in the olden days - in the mid 70s mechanical mochi pounders trickled into the scene and it was phenomenal! Nowadays, some households prepare their own in the machine, some would buy freshly pounded mochi sheets from their local 'wagashiya', 和菓子屋, Japanese confectionary store and some would opt for the individually wrapped supermarket portioned mochi that have a long shelf life.


But the real action can still be witnessed. Most regions continue the traditional 'mochi-tsuki taikai', 餅付き大会, 'mochi pounding festival' at their local temple or shrine where anyone can gather to watch the local experts and feast on freshly pounded mochi made with hard labour and love - the most tasty of all options no doubt. The two person mochi pounding operation calls for some skill - one person with the 'ki-ne', 杵, wooden pounder, will alternate with the mixer who turns the mochi swiftly between pounds, without getting their hand jammed in the pounding... quite an incredible exhilarating watch as the two continue in a rapid to and fro.

Slow grilling over chargrill is the ideal way to enjoy freshly pounded mochi but a grill or frying pan does suffice.


Arguably the most well-known and widely eaten nationwide is the 'isobeyaki' - grilled until soft inside, dipped in a pool of soy sauce and sugar and wrapped in nori seaweed, 海苔. This simple yet satisfying sweet and salty recipe is easy to make with ingredients that every Japanese household will stock.


Mochi is coated with kinako, powdered soy bean which is quite bland on its own, mixed with sugar to taste. Extra kinako sugar mixture is sprinkled over when serving, for good measure. The fluffy bean powder texture with stretchy mochi is quite remarkable.


Kusamochi is made by mixing 'yomogi', ヨモギ, the herb mugwort. It can be foraged in the wild if you're lucky or more commonly bought in supermarkets. After washing, it is boiled until soft and mashed in a mortar and pestle until a fine paste, and mixed in with freshly pounded mochi. It makes a beautiful vivid green and fragrant mochi that is delicious with 'anko' あんこ sweet red bean paste and/or kinako. It can be rolled out flat and round and wrapped around a ball of anko then grilled like in the above picture - a favourite snack sold around temples and shrines.


Another savoury mochi, topped with lots of grated daikon and seasoned with soy sauce. Daikon aids digestion so this recipe is perfect for when we've indulged in too much festive food. Daikon can have heat, hence the name 'karami' 辛味. A sprinkle of 'shichimi', 七味, Japanese seven spice (one variation: black and white sesame seeds, hemp seeds, Japanese pepper, nori seaweed flakes, green shiso and red pepper, but can vary depending on manufacturer) or 'ponzu', ポン酢, citrusy soy sauce are favoured too.


Read more about the health benefits of daikon and it's versatility in a previous post here.

'ozouni', お雑煮, New Year's soup
The staple New Year's soup, 'ozouni' cannot be disregarded. Every region has a local tradition - from broth, ingredients to miso type and style of mochi that is placed in it. Ozouni symbolizes health and longevity. Mochi that was offered to the gods would be brought to the people's table bringing purity and strength.


The tradition of the 'Kanto', 関東, east Japan area of Tokyo and its surrounding prefectures, is a simple transparent broth made with kombu, 昆布, and bonito, カツオ, seasoned with salt, with slices of light flavoured vegetables like daikon, mitsuba, 三ツ葉, an aromatic plant resembling stone parsley, with a rectangular mochi grilled and placed in the bowl with the soup.


The 'kansai', 関西, west Japan Osaka area is known for a rich white miso based 'ozouni' with a circular mochi, signifying unity and happiness. Ingredients include 'satoimo', 里芋, Taro potatoes, as well as daikon and carrots, making a creamy thick soup.


Households of inter-regional-marriages tend to have one type of 'ozouni' for the 1st January and the other for the 2nd to honour everyone's heritage. Peaceful solution :)

But honestly, mochi is so good, it is enjoyed all year round. The best part may be how long it keeps us going for. Due to the amino-pectin in Mochi, it is digested at a slow pace, which provides us with a steady supply of energy. An ideal snack for a busy day!