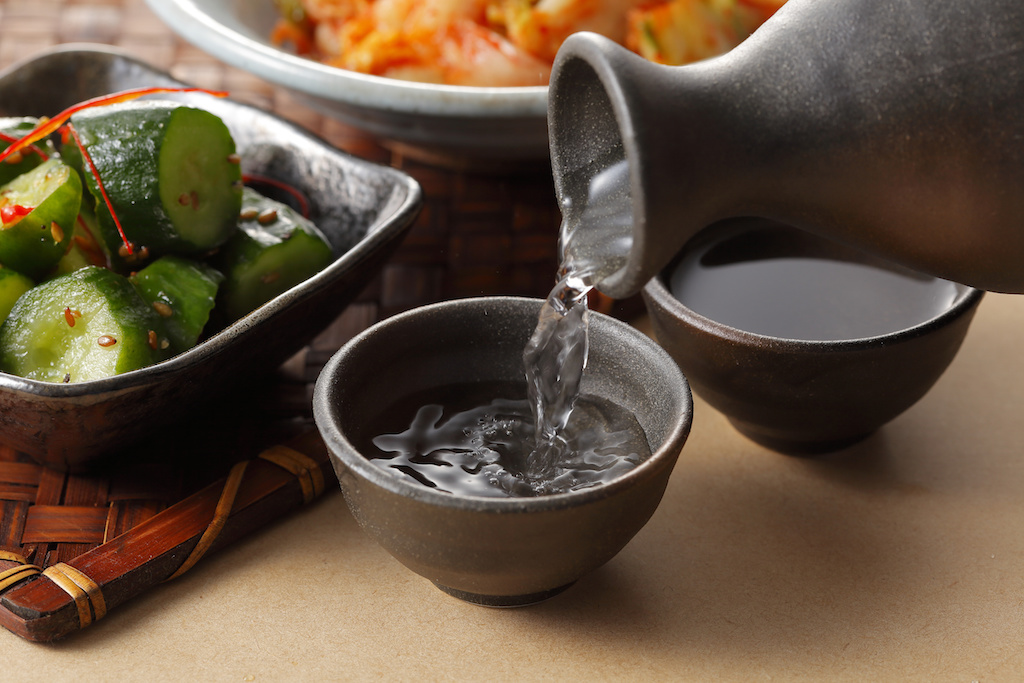 'ie' 家 means home and 'nomi' 飲み means drinking - 'ie-nomi' is the Japanese word for a cosy night in with drinks and friends/family or solo. Thrifty and relaxing 'ie-nomi' has become a popular option and supermarkets and department stores have caught on the trend, offering a huge variety of readily prepared dishes. Another hugely popular menu for 'ie-nomi' in the colder months is 'nabe'.

'Nabe' 鍋 is the Japanese word for 'saucepan' but when it's used in reference to the dish, the possibilities are infinite. 'Nabe' can be spicy, sweet or sour in broths made with soy sauce, fish broth, miso or seaweed with a huge variety of ingredients including everything from the ocean to the fields to the mountains.

The beauty of 'nabe'

'Nabe' is a very warming meal in many ways. A big bubbling 'nabe' placed in the middle of the table brings family and friends together, creating a cosy homely atmosphere. The steam and heat from the nabe on a portable gas stove constantly simmering, physically raises the temperature of the room, and lastly, nothing warms you more from the inside than a feast of steaming food. This perfect meal for winter is also known for it's healthiness. Vegetables cooking in front of your eyes entices you to eat them before they get squishy so it's easy to get carried away and consume a fair amount of healthy greens before you know it.
At a 'nabe' dinner, everyone is given a bowl and they help themselves from the centre 'nabe' - so extra condiments can be added to taste to each personal bowl. It's safe to say 'nabe' is a practical, easy and healthy meal for everyone during the colder months. Let's take a look at some of the most popular and well-known recipes. 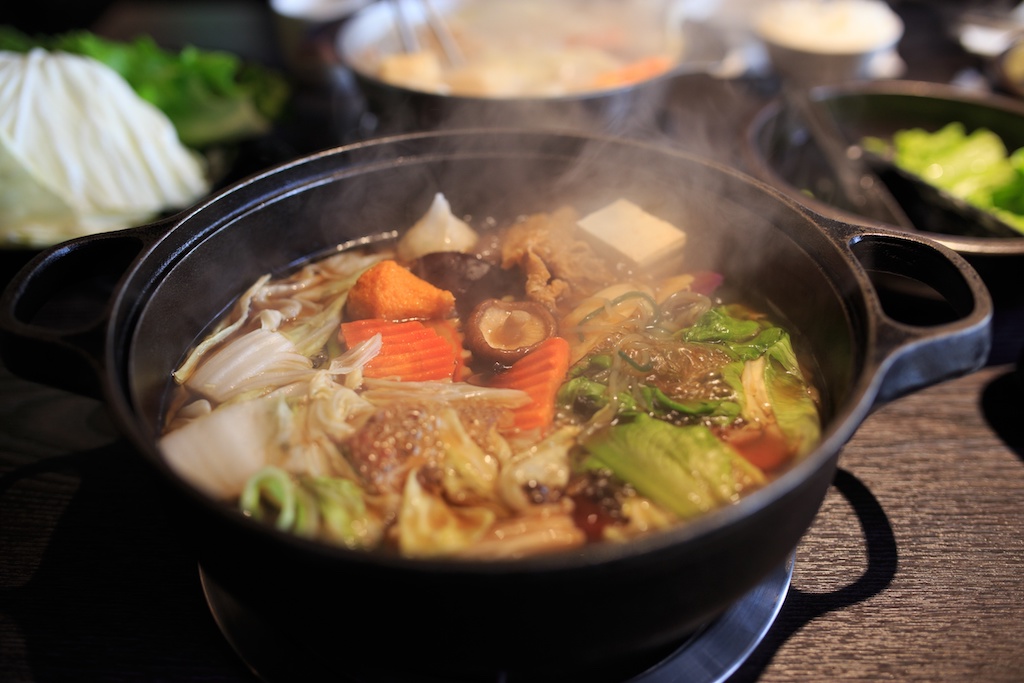 'Sukiyaki' might be better known as the name of a song that became an international hit. But did you know 'sukiyaki' was not the original title of the song? The tune was first brought to the UK by a British music executive named Louis Benjamin in 1962 in an instrumental version. He renamed the song to 'sukiyaki' after he enjoyed the dish, as it was easier to remember than the original title 'ue o muite arukou' 上の向いて歩こう, which means 'let's look up and keep walking'. It is a song encouraging people to look forward and ahead, letting go of sorrow in the past.

This makes the real 'sukiyaki' also sound like an uplifting dish! The soup is made with kombu 昆布 seaweed broth, water, soy sauce, mirin (fermented rice wine) and sugar. Typical ingredients will include finely sliced beef, leek, tofu, onions and shungiku 春菊, garland chrysanthemum. The dipping sauce is a raw egg, simply cracked in a bowl and beat thoroughly with chopsticks. It may sound a little strange at first but it is really good - 'sukiyaki' is a relatively sweet nabe and the egg makes it milder. 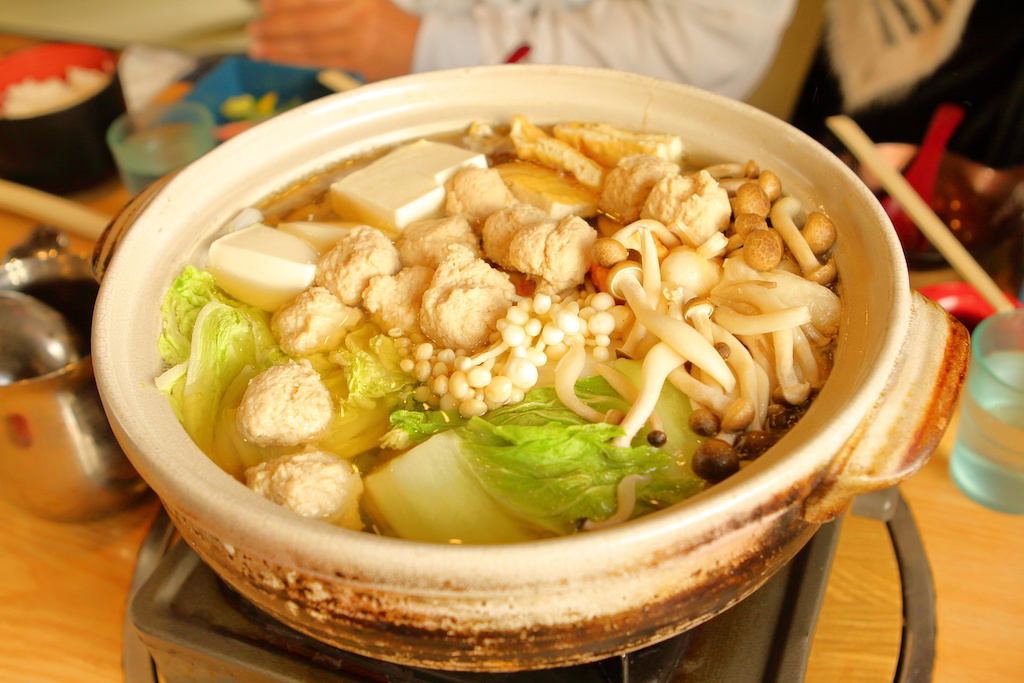 'Chanko' is the general term for sumo wrestler's meals - but as 'nabe' is such a frequent menu for them, the word 'chanko' has become synonymous with their hot pot.

'Chanko-nabe' or 'chanko' is regarded as an ideal dish for sumo wrestlers as it is easy to prepare in large quantities and is highly nutritious, the ingredients are cooked well eradicating fear of infectious diseases or parasites, and huddling around one 'nabe' brings the athletes closer creating a sense of camaraderie. When a beginner 'rikishi' 力士, sumo wrestler eats enough chanko, trains hard enough and starts to blend into the sumo world emotionally and physically, they could be appraised that 'chanko no ajiga shimitekita' ちゃんこの味が染みてきた, 'chanko is soaking in'!

'Chanko' became popular among the general public when retired sumo wrestlers began opening restaurants serving the dish. In the actual 'sumo-beya' 相撲部屋, sumo stables, all kinds of flavours and types of nabes are enjoyed, but the 'chanko' served in most restaurants is a kind of 'yose-nabe' 寄せ鍋, mixed nabe, that is a delightful jumble of vegetables, mushrooms, tofu, often including both meat and fish. The soup is a simple bonito or seaweed broth with soy sauce, mirin (fermented rice wine), brought to the boil with a dried red pepper. As a food born out of a sumo-stable, it would be rude not to have a 'shime' シメ top off, of noodles or rice. The favoured carbohydrate would be added to the end of the 'nabe' when most of the vegetables and meats have been devoured. When it's all heated up nicely, stirred eggs, sesame seeds, nori 海苔 seaweed, salt and pepper would be added for a perfect top-off to ensure your tum is full to the max - after all one of the important jobs of the sumo-wrestler is to eat well and keep growing! 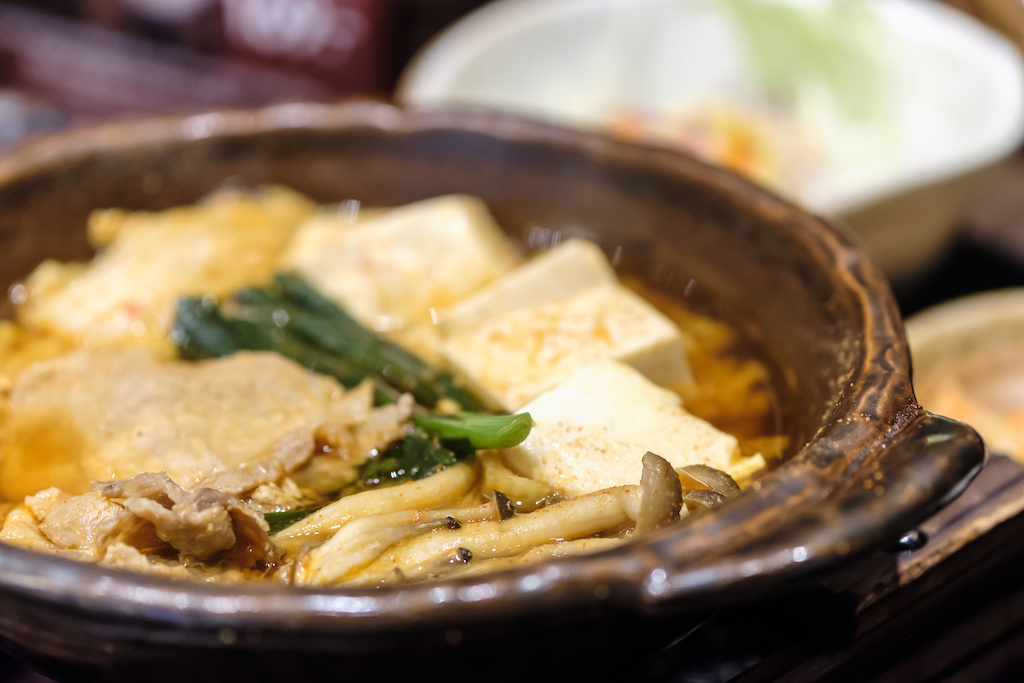 'Chige-nabe', that arrived in Japan from the Korean Peninsula, is known to be a spicy one, usually from the abundance of 'kimuchi' thrown in. Apparently 'chige' in Korean means 'nabe' so this 'chige-nabe' technically means 'nabe-nabe', saucepan-saucepan, but we'll let that be. If you're invited to a 'chige-nabe' party, expect kimuchi, spring onions, tofu, pork, shimeji mushrooms, leek and nira 韮 (Chinese chives; similar to spring onion, flat and without any white part). The spiciness adds more heat to all the warming attributes aforementioned. Chige-nabe is seasoned quite well so most of the time diners would scoop out the cooked ingredients and eat happily without adding any extra condiments. The perfect 'Shime' (top offs) could include udon or mochi (glutinous rice cake). 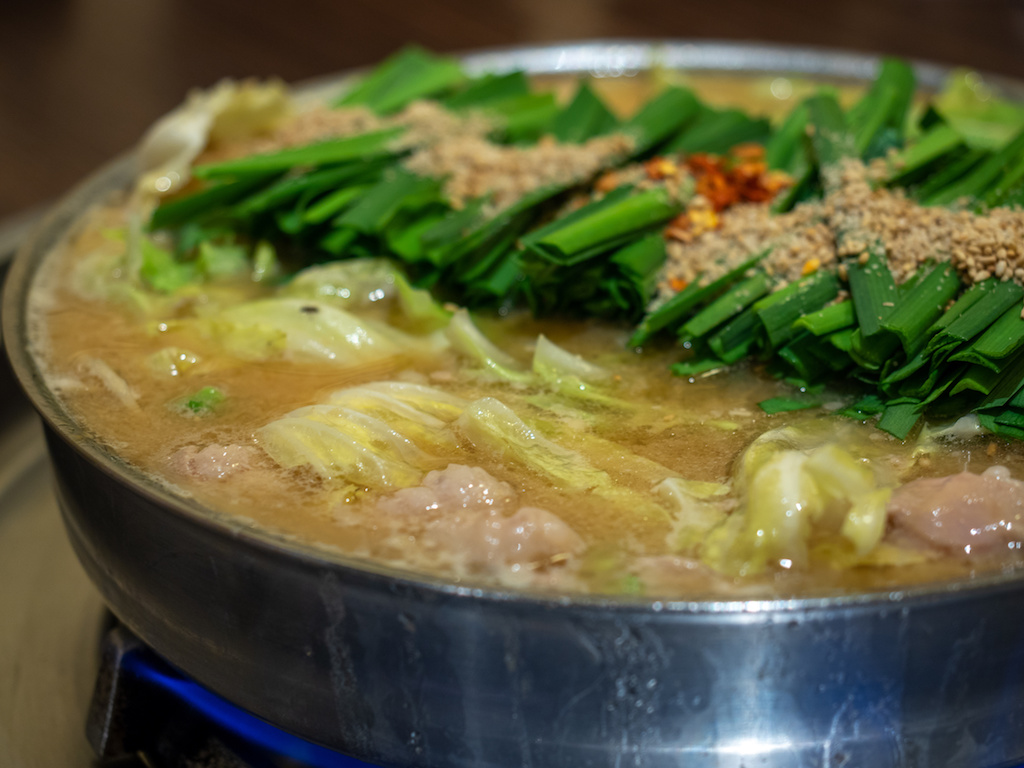 It is recommended to check you have no important meetings the following morning before you indulge in a bowl of this rich sticky goodness. The ingredients are relatively simple; nira 韮, cabbage, 'motsu' モツ tripe, bean sprouts and tonnes of garlic! Some favour an addition of red pepper and sesame seeds. The soup is made with water, chicken soup stock, soy sauce, sugar, garlic and ginger. Some variations include miso. Tripe is tender, bouncy and fatty, making this 'nabe' rich and satisfying even without a 'shime', but some pre-cooked rice would be quite marvellous. 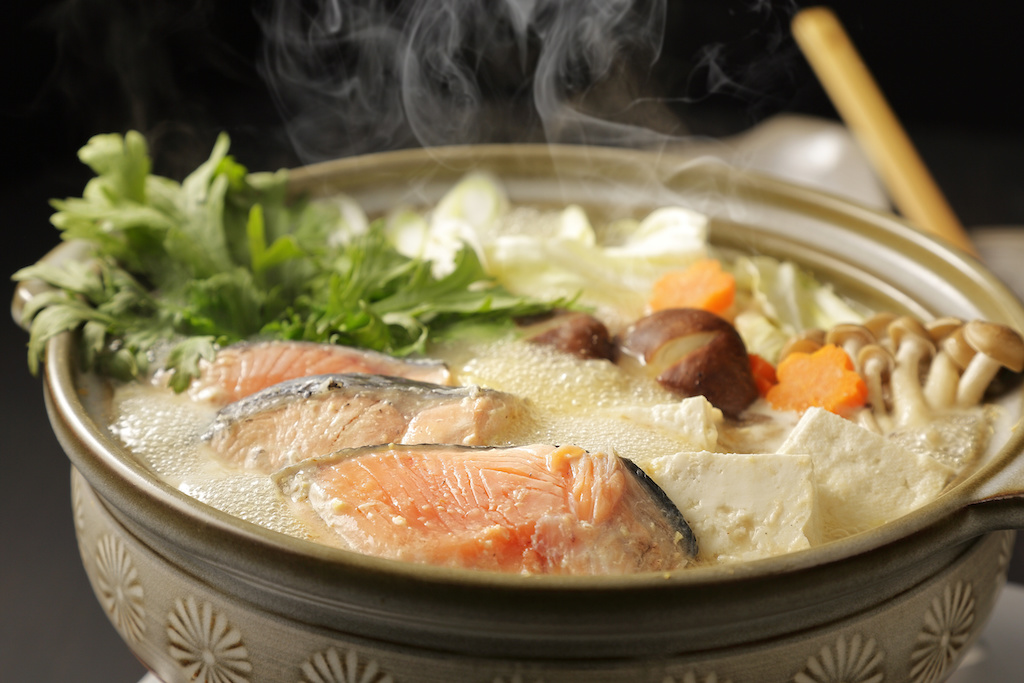 'Ishikari nabe' is a specialty of Hokkaido, the northern most prefecture of Japan where seafood is abundant, fresh and delicious - and as the temperature declines, the fish get fattier, richer and tastier! This 'nabe' is made with a broth of kombu 昆布, seaweed and miso - ingredients include tofu, onion, daikon, shiitake 椎茸, carrot, leek and fresh salmon - head, bony bits and all. Some like to add butter or milk for a creamy rich texture. Sansho 山椒, chinese pepper powder can be sprinkled before eating. 'Ishikari nabe' is only one of a large variety of seafood 'nabe's available in Hokkaido - so if you ever are in need of a change from all the excellent sushi, try a 'nabe'!

'nabe' is one of the most versatile dishes ever - if you tried a different flavour every evening, there are enough to easily see you through a month or two. In winter 'nabe parties' pop up here and there and friends and family gather at someone's home with beer, wine, sake or shouchu 焼酎, Japanese whiskey, and sweets in hand. So why don't we share one very simple recipe? 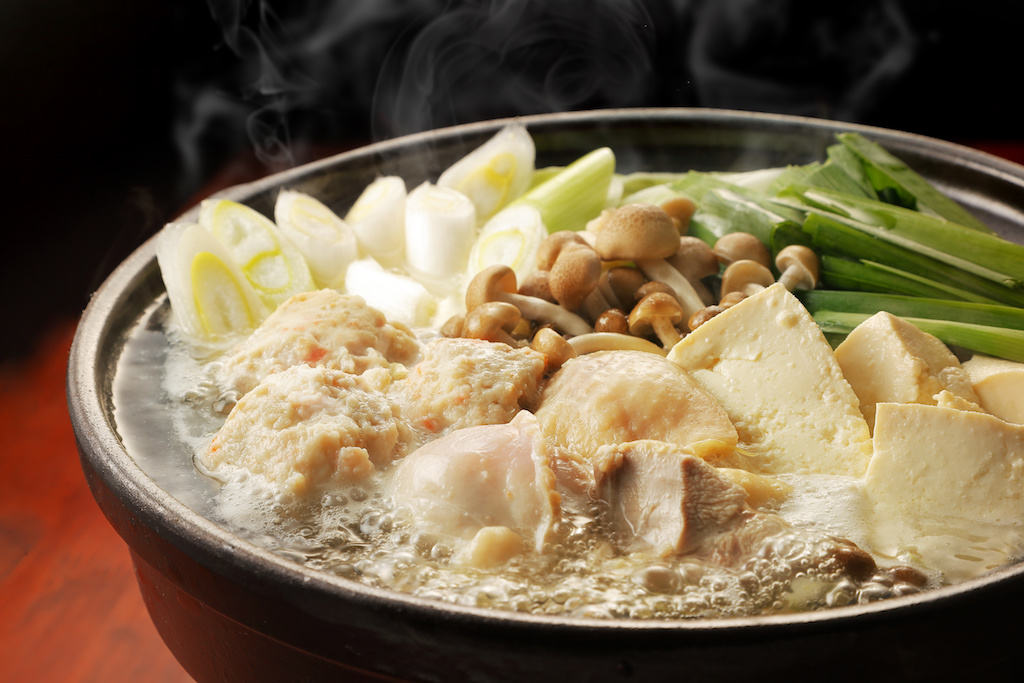 One big pot or saucepan

Enough individual bowls for your party

A portable gas stove to set on your table

4 cups seaweed broth or hot water for the soup

1) Heat the broth or water in the pot on the stove.

2) Add the meat/fish and simmer until cooked, then add the vegetables.

3) Whilst the pot is simmering, prepare the dipping sauce; mix the three ingredients.

* If you don't own a portable gas cooker, it can be prepared and cooked completely on your kitchen stove and brought to the table to be served.