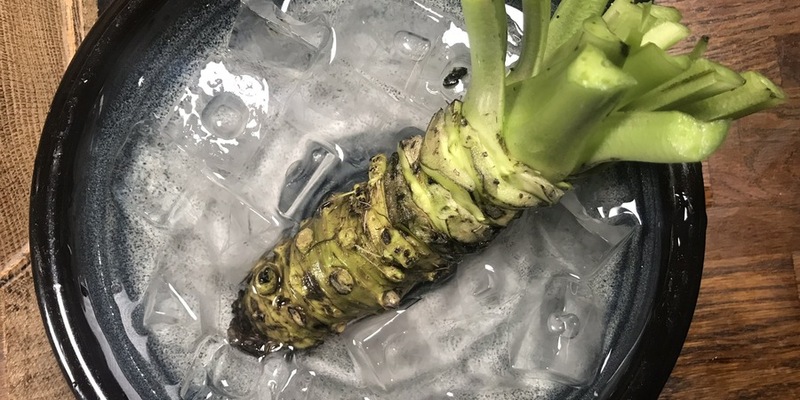 Did you know Japanese Wasabi is also known as 'tear'?

Wasabi is good for you!
Wasabi was originally included in sushi to ward off food poisoning for it’s antimicrobial properties and deodorizing effects since as early as the Asuka Period (592-710) - but for the more health conscious modern person, it may also be appealing that the fiery green plant is also packed with potassium, calcium, Vitamin C and phytochemicals that strengthen antioxidants in your body and help your skin fight free radicals.


Wasabi is said to be one the hardest plants to grow


Wasabi is found growing naturally in rocky river beds in Japan. As for wasabi farming, they thrive along misty mountain streams where there is an abundance of fresh clean water, the temperature is a between 8°C (46°F) and 20 °C (70°F) and the summers are high in humidity. Since they are intolerant to direct sunlight, they are typically grown under natural shades of larger trees or a canopy. It can take as long as three years for a Wasabi plant to reach maturity so farmers must be patient before profits start rolling in.


How to make that smooth paste
One end of the wasabi is sliced off, then it is peeled and pressed against the wasabi grater, made with shark skin, in a circular motion. The heat and flavour of grated wasabi will start dissipating after fifteen minutes – so it must be eaten fresh. So how come that green paste inside your sushi box tastes so strong after it’s been sitting in the supermarket for half a day? We hate to break it to you, but is usually a mix of mustard, European horseradish, and food colouring. In fact, by some estimates, only 5% of the wasabi served in Japanese restaurants around the world is the natural paste that comes from the actual root of a wasabi plant.


Wasabi sushi or wasabi maki
Wasabi is thinly sliced then cut into thin matchsticks and rolled into a maki-sushi. When it’s not grated, wasabi isn’t as fiery. It has an almost mint-like refreshing quality and a crunchiness like Japanese radish –  suitable for vegetarians and quite addictive!


Wasabi AKA 'tear'
In sushi restaurants in Japan, sushi chefs refer to wasabi as ‘namida’ 涙, the word for ‘tear’ in Japanese. As you can probably guess, this derives from the sharpness of the plant bringing tears to even the strongest of people. There are many more example of sushi chef's unique vocabulary like this.  It is used to communicate with their staff and customers are not expected to use these words, in fact it's considered a bit bad form to do so. But it can be interesting and exciting to know the secret language and noticing when they use them! We'll talk more about this in another post.